5 Reasons On Why Does Allah Test Us 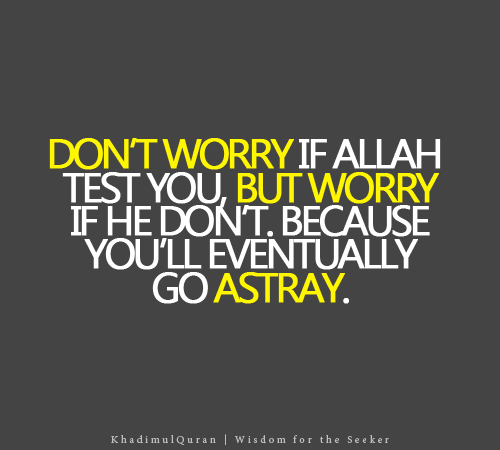 Allah tests His believing servants with various types of crises and disasters in order to:

1) Reveal the Patient from the Impatient:

“And certainly, We shall test you with a bit of fear, hunger, loss of wealth, lives and fruits. But give glad tidings to the patient ones who, when afflicted with a calamity, say: “Truly! To Allah we belong and truly, to Him we shall return.” They are those upon whom are the blessings, descend from their Lord, and they receive His Mercy, and it is they who are guided.” (Surah Al-Baqarah 2:155-157)

“And among mankind is he who worships Allah as if he were upon the very edge (i.e. in doubt); if good befalls him, he is content with it;. But if a trial befalls him, he turns back on his face. He loses both this World and the Hereafter. That is the evident loss.”(Surah al-Haj 22:11)

“So, it is a must for the souls to be nurtured by way of tests, and to be severely tested during the course of the battle between truth and falsehood with fear and hardship, and with hunger and decrease in wealth and life and fruits. This testing is a necessity so that the believer can give his share of what his belief requires; so that it becomes dear to him in accordance with that he gives for its sake of sacrifice and burden; so that it becomes dear to him in accordance with what he is willing to give for its sake! The bearers of worthless beliefs that do not require any type of sacrifice will not hesitate to abandon their beliefs at the first sign of hardship. So, the burden here is the personal price that one pays so that this belief becomes dear and valuable in the hearts of its bearers before it becomes dear to the hearts of anyone else. Whenever they experience pain for its sake, and every single time they are forced to give something up for its sake, it becomes even dearer and more valuable to them, and they become even more honored with it. With this, nobody else will realize its value until they see how its bearers are tested because of it and how patient they are upon such tests.”

2) Remove Our Sins and Reward the Righteous:

“And, when he was old enough to walk with him, he said: “O my son! I have seen in a dream that I am slaughtering you, so what do you think?” He said: “O my father! Do that which you are commanded, if Allah Wills, you will find me to be of the patient.” Then, when they had both submitted, and he had laid him prostrate on his forehead, and We called out to him: “O Ibrahim! You have fulfilled the dream!” Verily! Such do We reward the good-doers.” (Surah as-Saffat :102-7)

Sa’ad bin Abi Waqqas reported that he asked the Messenger of Allah (SAW): “Which of the people are tested most severely?” Rasulullah (SAW) replied: “The Prophets, then the righteous, then those who are most like them, then those who are most like them from the people. A man is tested according to his religious commitment. So, if his religious practice is sound, then his testing is increased, and if his religious practice is weak, then his testing is reduced. A servant continues to be tested until he walks the Earth without a single sin on him.” (Ahmad, Tirmidhi)

3) Purify the Ranks and Distinguish the Righteous from the Wicked:

“Allah will not leave the believers in the state in which you are now until He distinguishes the wicked from the good.” (Surah Al ‘Imrân 3:179)

4) Emphasize the Hardships of This World in Comparison to the Hereafter:

“Blessed is He in Whose Hand is the kingdom, and He is Able to do all things. The One Who has created death and life in order to test you and see which of you is best in deed, and He is the All-Mighty, the Oft-Forgiving.” (Surah al-Mulk 67:1-2)

5) Expose the Reality of the Human Being:

“Verily, We have created man from drops of mixed semen in order to test him, so We made him hearer, seer. Verily, We showed him the way, so he is either grateful or ungrateful.” (Surah al-Insan 76: 2-3)

“Verily, We have made that which is on earth as an adornment for it so that We may test them as to which of them are best in deeds.” (Surah al-Kahf 18:7)

“And it is He Who has made you generations after generations, replacing each other on the earth. And He has raised you in ranks – some above others – that He may test you in that which He has bestowed on you. Surely, your Lord is Swift in retribution, and certainly He is Oft*-Forgiving, Most Merciful.” (Surah al-An’am 6:165)

“A human being is tested so that he may come to know the reality of himself and others. Life is consists of constant testing; testing with what is bad, or testing with what is good. However, what is best for the believer may be found in what he hates, and what is bad for him may be found in what he likes. The true believer is the one who loves that which Allah has chosen for him. So, if He tests him with something that he loves, he thanks Him, and if He tests him with that which he hates, he is patient and thanks Him in this case, as well. And Allah – the Glorified – gives the believer in accordance with what will lead to his happiness in either this World or the next. So, if it is better for him to have something, Allah gives it to him. If it is better for him not to have something, Allah prevents him from having that thing, just as one who is sick is prevented from too much food or water. Therefore, it is upon a person to completely submit to Allah – the Glorified – in regards to what He has chosen for him, and to be pleased with what Allah has given him, and to understand that if Allah prevents him from something, then it is because Allah wishes to save him from being tested with that thing.”