Alcohol and its Punishments in islam. 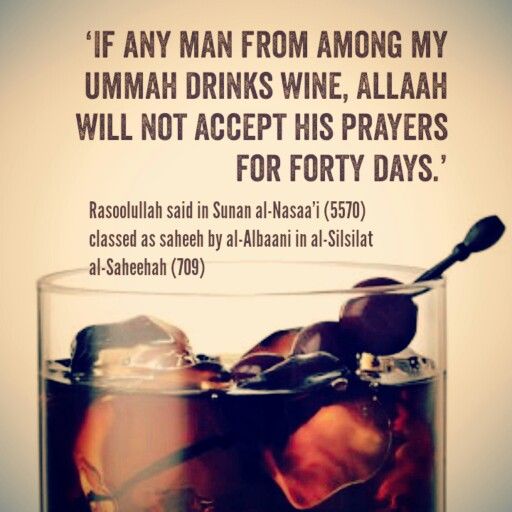 Islam’s holistic approach to health and well-being means that anything that is harmful or mostly harmful, is forbidden. Therefore, Islam takes an uncompromising stand towards alcohol and forbids its consumption in either small or large quantities. Alcohol is undoubtedly harmful and adversely affects the mind and the body. It clouds the mind, causes disease, wastes money, and destroys individuals, families, and communities. Researchers[1] have proven that there is a strong link between alcohol and gambling. Drinking impairs judgement, lowers inhibition, and encourages the type of risk taking involved in gambling and dangerous activities. God tells us in the Quran that intoxicants and gambling are abominations from Satan and orders us to avoid them. (Quran 5: 90)

In Australia, a country with a population of around 20 million, about 3000 people die each year from alcohol abuse while 65,000 others are hospitalised. Studies have consistently revealed a link between heavy drinking and brain damage and around 2500 Australians are treated annually for alcohol related brain damage. Research in the United Kingdom indicates that 6% of cancer deaths are related to alcohol abuse and Harvard Centre for Cancer Prevention says that drinking greatly increases the risk for numerous cancers. Alcohol is considered highly carcinogenic, increasing the risk of mouth, pharynx, larynx, oesophagus, liver, and breast cancers. Drinking alcohol during pregnancy can lead to Fetal Alcohol Syndrome, causing the child to be small at birth, have some facial malformations, small eye openings, webbed or even missing fingers or toes, organ deformities, learning disabilities, mental retardation and much more.

Researchers in Australia have also estimated that 47% of all those who commit violent crimes, and 43% of all victims of these crimes, were drunk prior to the event. Alcohol is responsible for 44% of fire injuries, 34% of falls and drownings, 30% of car accidents, 16% of child abuse instances, and 7% of industrial accidents. Even though it is clear that alcohol is responsible for a great many evils it is legal and even encouraged in most societies. In Muslim countries where alcohol is forbidden many people still find it difficult to resist temptation and fall prey to the disease that is alcoholism. Amazingly even in the light of such startling evidence against alcohol, people around the globe continue to consume alcohol in ever-increasing amounts. Why?

Alcohol is one of the tools Satan uses to distract humankind from the worship of God. God states clearly in the Quran that Satan is an open enemy towards humankind yet by drinking alcohol, we invite Satan into our lives and make it easy for him to distract us from our real purpose in life, to worship God.

“Surely, Satan is an enemy to you, so treat him as an enemy. He only invites his followers that they may become the dwellers of the blazing Fire.” (Quran 35:6)

Alcohol affects the mind and makes sinful behaviour and evil actions fair seeming. It creates enmity and hatred between people, prevents them from remembering God and distracts them from praying, and calls them to participate in unlawful sexual relationships. Alcohol generates shame, regret, and disgrace, and renders the drinker witless. It leads to the disclosure of secrets and exposure of faults.

“Satan wants only to excite enmity and hatred between you with intoxicants (alcoholic drinks) and gambling, and hinder you from the remembrance of God and from the prayer. So, will you not then abstain?” (Quran 5:91)

In pre Islamic Arabia, alcohol use was widespread. To eradicate this evil, God in His mercy revealed the prohibition in stages. First, He made it clear to them that the harm of drinking alcohol is greater than its benefit, next He told the Muslims not to come to prayer while intoxicated and finally, He revealed a verse totally prohibiting alcohol.

“O you who believe! Intoxicants (all kinds of alcoholic drinks), gambling, idolatry, and divining arrows are an abomination of Satan’s handiwork. So avoid that so that you may be successful.” (Quran 5: 90)

When this was revealed the Muslim citizens of Medina immediately began to destroy and empty their alcohol containers into the streets. Even those who were guiltlessly enjoying cups of wine spat the alcohol from their mouths. It is said that the streets of Medina ran with alcohol. Why then is it so difficult to expunge this evil in the 21st century? Believers today must completely trust God, in the same way that the first Muslims trusted God and understood that He was their only Protector and Provider. All power and strength comes from God and a scourge like alcohol can be eradicated only when those affected by alcohol turn to God with complete submission.

The Quran is a book of guidance sent to all of humankind. It is a set of instructions from the Creator for His creation. If we follow these instructions, our lives will be easy and tranquil, even in the face of disaster and mishap. God links alcohol and gambling to idolatry and declares it filthy and evil; however, He is merciful and generous towards the believers and acknowledges the power of addiction.

Islam is committed to encouraging and facilitating those who wish to repent from evil doing and sinful behaviour. God accepts repentance from those who are truly sorry for their actions and committed to staying away from sin. Muslim communities do not ostracise those who have made mistakes but keep them within the fold of Islam encouraging them to seek the closeness to God that will allow them to leave sinful behaviour. Friends, family, and neighbours do not just look away while a person destroys himself or his family. Islam is a community-oriented faith. There is no place for an individual to do what he wants to do, if it hurts others. Alcohol abuse affects not just the alcoholic but also his or her family, and community. There is great wisdom in the prohibition of alcohol. 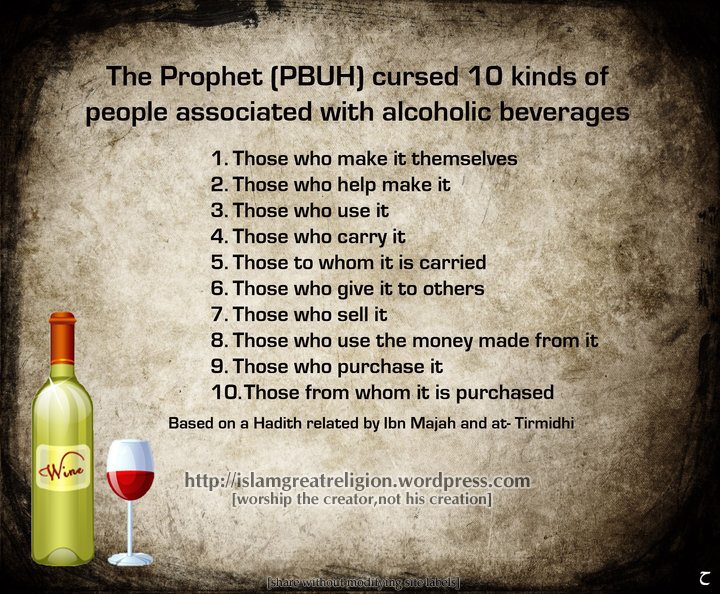 What is the punishment or penalty when one has drunken alcohol?
Can the person make salaat/ramadan?
Published Date: 2002-05-27
Praise be to Allaah.
Allaah says (interpretation of the meaning):

“O you who believe! Intoxicants (all kinds of alcoholic drinks), and gambling, and Al-Ansaab, and Al-Azlaam (arrows for seeking luck or decision) are an abomination of Shaytaan’s (Satan’s) handiwork. So avoid (strictly all) that (abomination) in order that you may be successful”

It is also narrated in al-Bukhaari (5147) and Muslim (3736) from ‘Abd-Allaah ibn ‘Umar (may Allaah be pleased with them both) that the Messenger of Allaah (peace and blessings of Allaah be upon him) said: “Whoever drinks wine in this world and does not repent from that, he will be deprived of it in the Hereafter.”

There are very many ahaadeeth and reports which state that alcohol is emphatically forbidden and that it is the mother of all evils; whoever falls into this sin, it will lead him into other evil actions. We ask Allaah to keep us safe and sound.

With regard to the punishment of the drinker in this world, the punishment is flogging, according to the consensus of the fuqaha’, because of the report narrated by Muslim (3281) from Anas (may Allaah be pleased with him), who said that the Prophet (peace and blessings of Allaah be upon him) flogged the one who had drunk wine with palm branches stripped of their leaves and with shoes.

But there is some difference of opinion as to the number of lashes. The majority of scholars are of the view that it is eighty lashes for a free man and forty for others.

They quoted as evidence the hadeeth of Anas quoted above, in which it says that a man who had drunk wine was brought to the Prophet (peace and blessings of Allaah be upon him), and he had him flogged forty times with two palm branches that had been stripped of their leaves. Abu Bakr also did likewise (during his caliphate). When ‘Umar was the caliph, he consulted the people and ‘Abd al-Rahmaan said, “The minimum punishment is eighty,” so that is what ‘Umar commanded.

The Sahaabah agreed with ‘Umar (may Allaah be pleased with him) and did not differ. The Council of Senior Scholars is agreed that the punishment for one who drinks wine is the hadd punishment, which is eighty lashes.

Some of the scholars – such as Ibn Quddamah (may Allaah have mercy on him) and Shaykh al-Islam [Ibn Taymiyah] in al-Ikhtiyaaraat – think that giving more than forty lashes is left to the discretion of the Muslim leader. So if he thinks that there is a need to give more than forty lashes, as happened at the time of ‘Umar, then he may make it eighty. And Allaah knows best.”

With regard to the wine-drinker’s prayer and fasting, undoubtedly he is obliged to perform the prayers on time and to fast in Ramadaan. If he neglects any of his prayers or fasts, then he is committing a major sin which is worse than the sin of drinking alcohol. If he drinks wine during the day in Ramadaan then he is committing two major sins: the first is breaking the fast during the day in Ramadaan and the second is drinking alcohol. He should note that if a Muslim falls into sin and is unable to repent because his faith is weak that does not justify him persisting in sin or failing to do acts of worship and being negligent concerning them. Rather he should do whatever he can of acts of worship and strive to give up the major sins that he is committing. We ask Allaah to help us to avoid sins, both major and minor, for He is the All-Hearing, Ever Near.

Reference site
https://islamqa.info/en/20037
All research in this article is taken from http://salvos.org.au/need-help/thefacts/documents/Bingedrinking.pdf